"Meet & greet" with our company representative on arrival at NJP / IXB / Siliguri and drive to Phuntsholing. After arrival at, check-in & get fresh. Enjoy your leisure evening at local market by walk at your own. Overnight stay at hotel in Phuntsholing.

After breakfast go for permit, After permit transfer to Thimphu, Not only the capital but Thimphu is also the largest city of Bhutan  - It has a population of 104,200 - On Road Water Falls & Natural Sightseeing, Chukha Dam (Top View) En-route. After arrival at Thimphu, check-in & get fresh. Enjoy your leisure evening at local market by walk at your own. Overnight stay at hotel in Thimphu.

After breakfast drive to Bumthang via Wangdue, Trongsa. En-route visit Dochula Pass ( Altitude – 3100 Mtr.). After arrival at Bumthang, check-in at hotel & get fresh. Enjoy your leisure evening at your own. Overnight stay at hotel in Bumthang.

After breakfast drive to Punakha via Punakha local sightseeing. After arrival at Punakha, check-in at hotel & get fresh. Enjoy your leisure evening at local market by walk at your own. Overnight stay at hotel in Punakha.

After breakfast depart from Punakha & drive towards Paro, A Destination of Scenic Beauty & the Only International Airport in Bhutan having a population of 39, 800, distancing approximately 145 km and 4 hours from Punakha & Wangdue & Paro is a town and seat of Paro District in the Paro Valley of Bhutan - Sacred sites and historical buildings scattered through the area - The Paro Valley is wide and verdant and is beautiful after arrival check-in at hotel. Relax in the evening. Overnight stay at hotel in Paro.

After breakfast go for Paro Local Sight Seeing – Drukgyal Dzong, View of Taktsang Monastery, Kichulanka Monastery, Ta Dzong, Paro Rinpung Dzong (Museum), Nya-mey Zam, Dungtse Lhankhang, Druk Choeding. After visit back to the hotel & get fresh. Then enjoy your leisure evening at local market by walk at your own. Overnight stay at hotel in Paro.

After breakfast drive to Chele La, Haa Valley ( 130 km up & down ), on the way enjoy the Bird View of Paro Airport. Chele La (Pass) is the only border of Bhutan and China situated at an elevation 3,988 meters is considered to be one of the highest motorable passes in Bhutan. About an hour's drive along a densely-populated forest road. This Pass is also known to be a ‘botanical paradise’. The pass provides stunning views of the sacred mountain Jhomolhari and Jichu Drake. It is also marked by hundreds of prayer flags fluttering in the wind. Here, visitors can see cascades of wild roses; purple and yellow primulas; and swathes of deep blue iris covering the forest floor. The top of the pass bloom with rhododendrons in a variety of colors-pale pink, deep pink, burnt orange, mauve, white and scarlet. After visit back to the hotel & get fresh. Then enjoy your leisure evening at local market by walk at your own. Overnight stay at hotel in Paro. 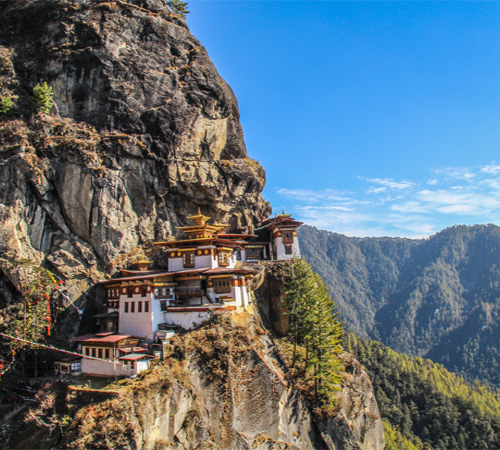