The official capital of India, Delhi is the most popular Union Territory that exists in the Indian soil. Delhi has enjoyed being the seat of power since times immemorial, right from the age of the Mahabharat. This kingdom is seamlessly interwoven with elements from the past and the present in an almost artistic fashion. With towering malls overlooking majestic Mughal forts, and dusty lanes frequented by four wheels, Delhi & Agra will bring you to a pandora of ancient buildings, monuments, natural heritages, wonders of the worlds & sky-kissing scrapers that stand spotless in pride.

Designed by Edwin Lutyens, this monument was erected in the year 1921 and was dedicated to India by the then Viceroy, Lord Irwin. This monument stands in the memory of the Indian soldiers who lost their lives in the First World War. There are more than 13, 516 names of Indian & British soldiers engraved in it.

The Lal Qila was built in the year 1638 and was generally erected to secure some isolation from the humdrum of local life. It is made of beautiful sandstone and is a magnificent example of the grandeur of the Mughals. Visit here for exotic evening shows that are a symphony of sound & lights.

Built in the memory of his beloved wife, Shah Jahan created this timeless monument with unconditional love. The marble creation overlooks the Yamuna and is one of the Eight Wonders of the World. Words fall short in the description of its beauty.

The tower is 73 meters tall and has been towering since 1193, commemorating the victory of Qutab ud-din Aibak over the last functioning Hindu dynasty. The tower is five stories high and is a classic monument that cannot be missed.

This exotic tomb, fondly known as the Makbara-e-Humayun, was built nine years after the emperor’s death. This exclusive monument was built by his widow Bega Begum and was designed by Mirak Mirza Ghiyath who hailed from Persia.

Jantar Mantar is an archaeological marvel that was designed to draw astronomical significance. Encompassing five observatories, a visit to this unique destination will have you attend informative tours regarding the history and depth behind this marvel, like never before.

This market is every shopaholic’s heaven. From books to fabrics, spices to precious & semi-precious jewelry, perfumes, and electronics, souvenirs to antiques – you can score everything at throwaway prices.

This is last of the seven major Bahai’s temples. Built in the shape of a lotus, the symbolism of this structure unites the faiths and beliefs of Hinduism, Islam, Buddhism & Jainism. Tourists from every faith visit its pristine premises and meditate in good faith.

Delhi is easily accessible by air, with the presence of the Indira Gandhi International Airport and Palam Domestic Airport that connects the capital to all of the major Indian as well as international hubs.

Delhi and Agra are easily accessible through the Inter-State Bus Terminus where numerous vehicles run by the Delhi State Transport Corporation ply on a regular basis to adjacent domains like Agra, Punjab, Himachal Pradesh, Haryana, Uttaranchal, Rajasthan, and so on. 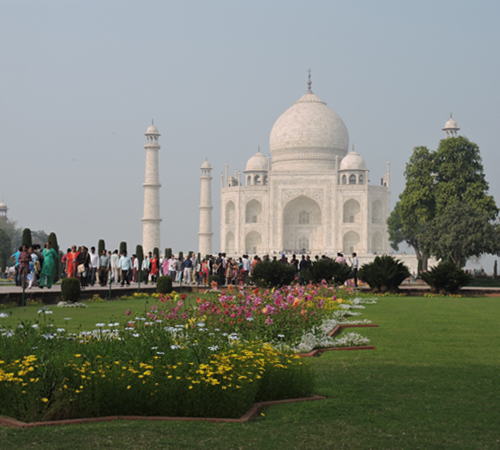